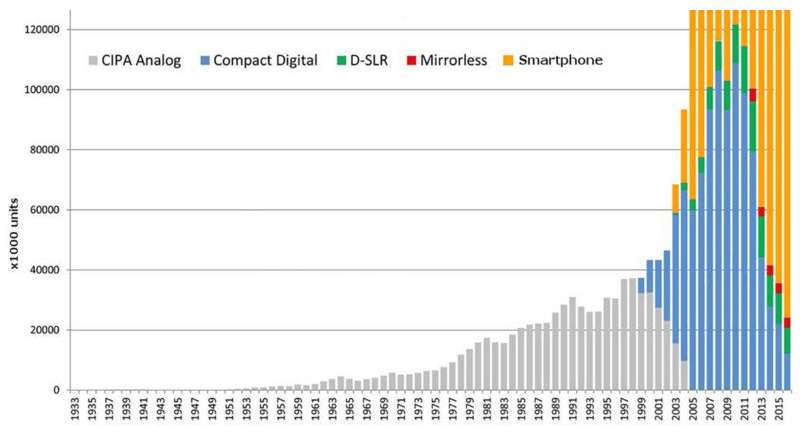 Today I read an article on PetaPixel abut the camera market compared to the smartphone market. You can find the original article here.

From the article I took a graphic that was created by the photographer Sven Skafisk (I wanted to go to the source and link him, but I have not found a link in the article or his page on Google) who spent the time to put on a graphic the data of the camera production from 1933 to today, divided by typology and including the smartphone camera market.

The article is very interesting and points the difference in scale between the camera and phone market. It’s worth to read.

But what really impressed me about this graph is the comparison of the camera numbers before and after the digital revolution.

How this can mean good news for professionals photogrpahers?

We can see that after the end of the film era in 2005, anybody wanted to become a photographer and the sales of digital equipment (from compact to serious cameras) really increased exponentially.

In those years we have seen crowds of people getting one good picture with a digital camera that decided to buy a D-SLR and become “photographers”. I lived this transition in Italy where anybody pretend to be an artist and, due to a limited market and crazy taxes, the competition of improvised photographers often made the difference for pros between a survival situation and the bankrupt. So I was in a good point to observe the change, but in all the world there was a similar situation also if it was less excessive.

Now we see in the numbers that the digital camera sales finally came back to the level of the film camera and even less.

This in my opinion, looking what is happening around me, is a very good news because it means that a lot of people stopped to pretend to be a photographer. The clicking moms or the “camera club” crowds, discovered that photography is not just having a nice tool but something more.

In my career I have seen a lot of “photographers” rise and fall in few years and with the advent of digital this process become more wide and quick. In Italy the so called “photo clubs” are the perfect example. A lot of amateurs join the club, get some good review by their fellow members and decide to work in cash avoiding taxes just to “test themselves”, attracted by the good (!) money (easy to be happy to have earned some hundred dollars if you live on a salary from another job) they open a business and then the reality comes down as an ax on their neck.
They realize finally how hard is to manage a business and that they are absolutely not ready to deal with the market because they lack not only the knowledge of photography but also the skills to manage the clients and to price themselves in the right way.

The decline on sales of digital cameras means that finally the weekend photographer get a smartphone and do not pretend anymore to be a professional. All this means less people ruining the market for the professionals and lowering the quality of the work. We finally start again to have the distinction between serious and improvised photographers, also as equipment.

The market for photography is expanding thanks to all the new media, we see thousand of different pictures everyday, so I’m optimist that there will always be a market for serious photography, but the access to the top market passes by the low end and often that sector is invaded by the unprofessional crowd.
If they are stopping to buy cameras it means that they finally realized a good camera is not enough and will leave more room to the people seriously thinking to make a career in photography.

Just to explain what I think is a “serious” photographer, it’s a person that will spend years reading manuals, attending workshops, assisting other photographers, growing and taking pictures before thinking to become a professional.

To be back at the numbers of film cameras means that every person that did not intend to spend on training and learning what we spent, at least, in film, gave up. Cameras will be again for people serious about photography and smartphone will be perfect for the improvised photographers.

The camera industry lived and survived very well with the film era sales numbers, when a camera lasted 40 years, I’m pretty sure they can survive and live well with the same numbers also in the digital era.

I also add a simple fact: I’m a photographer, so I like the idea of less competition and I do not care much if the camera producers will earn more or less money. This is good news for professional photographers even if is not so great for whoever sells the cameras.
I think that this has another positive side: to be finally considered again as partner by the camera manufacturers and not just cows to milk. I remember spending a ton of money in film equipment, from 135mm and medium format to 4″x5″ view cameras and the producers were considered partners, always giving the best assistance, having representatives passing by the studio to let us test new cameras and communicating with us professionals in a constant way. Now I feel like we are only cows to milk and, with the exception of some very high end brands as PhaseOne or Broncolor we are left to ourselves and the only way to test a pro camera costing several thousands of dollars is for 2 minutes during crowded events.

So, at the end, I see this graph demonstrating the decrease in sales of cameras as a very positive indication for the professional photographers.